In observance of the Independence Day holiday, Collbran, De Beque, Orchard Mesa, and Palisade Branches will be closed Saturday, July 2. All other library locations will be closed Monday, July 4. 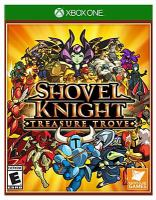 Description
Play as Shovel Knight in five different games.
Shovel Knight: Treasure Trove is the full and complete edition of Shovel Knight, a sweeping classic action adventure game series with awesome gameplay, memorable characters, and an 8-bit retro aesthetic! Become Shovel Knight, wielder of the Shovel Blade, as he runs, jumps, and battles in a quest for his lost beloved. Take down the nefarious knights of the Order of No Quarter and their menacing leader, The Enchantress. - Steel your Shovel Blade and start digging through the adventure that started it all! Battle foes and discover treasures as you quest to defeat the Order of No Quarter and their leader. - Prime your potions and become the maniacal alchemist Plague Knight in his adventure to brew the ultimate potion! - Take control of Specter Knight to dash through completely redesigned levels by climbing walls, mastering a new arsenal of weapons, and slashing your foes to ribbons. - Play as King Knight, the gilded goon himself, as he travels through 4 new worlds and more than 30 all new courses, on a journey to best the Three Kings who rule over the land.
Also in This Series

No Tags, Be the first to tag this record!