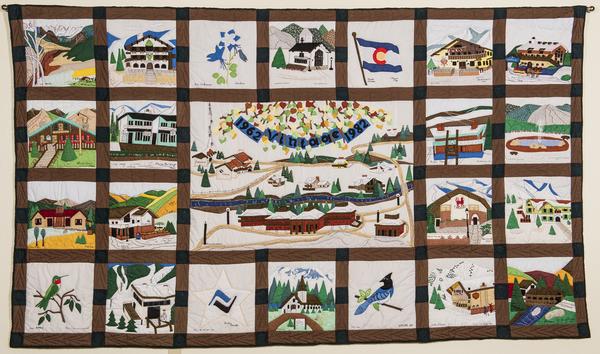 The Vintage Vail Quilt that hangs in the Vail Public Library Community Room was donated to the Town of Vail, in 1982, by a group of 21 women who created the quilt to commemorate the 20th anniversary of Vail. The quilt has been on display in the library since 1986.

Each of the quilt squares depicts a different scene that represents an aspect of the Town of Vail. The various images were constructed by appliqué and embroidery techniques. Each square contains an embroidered title, date and signature . Twenty one women contributed to the making of the quilt, so the stitching lengths and methods vary somewhat. All of the stitching, including the embroidery, appliqué, quilting, and piecing stitches appear to be done by hand. When the quilt was hung in the library in 1986, it had to be modified to fit the available space by removing 2 of the original squares (Golden Peak and Lionshead Gondola). This modification means only 19 of the women had panels that were included in the final quilt.

The quilt was restored in 2012 in preparation for its new permanent location in the library's renovated Community Room. Funds for the quilt's restoration came from the Friends of Vail Public Library.

The items in this digital collection include photographs of the quilt and its panels, the book titled "Vintage Vail Quilt," oral histories recorded in 2016 from three of the women who participated in the quilt's creation, assorted personal photographs, and a copy of the original letter from the Mayor of Vail, Rodney Slifer, accepting the gift of the quilt in December of 1982.
Updating results, please wait.
60 objects in this collection.
CONNECT WITH US